Chile's algal bloom of March 2016 resulted in the loss of more than 125,000 mt of killed farmed salmon, some 25 million dead fish.

Fish farms always say they bring jobs to rural areas in need of employment, but twice in the past decade have laid off 13,000 to 26,000 workers in the ISA crisis in 2008, and now, less than a decade later, the algal bloom caused by an El Nino, fish farm sewage, and dumping of more than 75,000 mt of dead fish less than 50 miles off shore has brought the total of jobs lost this time to 10,000.

Fish farms are a boom bust industry and workers lose. Even in BC, Marine Harvest let 60 staff go just before Christmas a few years ago - and it won't take long for it to happen again, as owner, Fredriksen sold off $548 million MH shares recently, betting on a bust. Oh, and, Aarskog, CEO, wasn't laid off. MH lost 2.5 million fish in the algal bloom.

Currently, the 10,000 plus jobs lost are comprised of:

"According to estimates by Universidad Mayor economist Tomas Flores the total job losses are comprised of 5,000 small-scale fishers who have stopped work because of a ban on fishing, 4,000 aquaculture industry workers -- including salmon farmers -- and another 2,300 indirect jobs."

The small-scale fishers job loss are a direct result of the fish farm fish/algal bloom. They carried out a 17-day strike in May that paralyzed farmed salmon shipments, including feed, to protest the ban on fishing that the government applied after officials discovered high levels of toxins in seafood caused by the red tide.


And now, Marine Harvest has laid off some more staff  in Chile:  http://www.intrafish.com/news/761871/marine-harvest-announces-layoffs-at-chilean-plant.

Because of salmon deaths, MH is laying off staff, about 145 in total. What this means is that in an industry in which disease kills, according to Professor Kibenge in PEI, one third to one half of its animals, workers are the front line pawns, sorry, that is harsh, as each individual situation is a personal tragedy, fish farm companies let them go. The alternative is on-land, closed containment and no one needs to get fired.

"1. Marine Harvest, the bellwether of the global salmon farming industry, has successfully played an unsustainable dividend payout game to please its institutional owners and keep its share price up.

2. With a steep valuation after a multi-year rally, this stock is ripe for a correction. This article will argue why readers should be (short-)selling Marine Harvest at current levels.

3. Bulls are right in that salmon farming constitutes a promising source of food production for the future. The industry is supported by steadily growing demand and R&D improvements.

4. However, salmon farming is still farming. And farming means a commodity business where Mother Nature will offer challenges along the way, in the case of salmon: biological and environmental issues.

5. Major shareholder John “Viking Raider” Fredriksen and insiders cast their vote by cutting their holdings. Further operational problems or a cyclical salmon market downturn will eventually push this stock down."

So, even the owner of Marine Harvest, John Fredriksen has been and will be selling stock in his own company, to make money out of its Bust.

But there is more:

This article will discuss why the stock market valuation of Norway-based salmon farming giant Marine Harvest MHG is ripe for a major correction.

It all boils down to investor overconfidence in the robustness of MHG's line of business and associated cash flows. The stock promoters of MHG and the salmon farming sector continue to talk about further industry consolidation potential as a returns to scale play. Combined with a salmon price that has been on a tear of late even in strong USD terms (and more so in weak Norwegian kroner terms) MHG and the sector have risen to multi-year valuation peak levels. In USD terms, MHG's share price is up over 300 percent since last bottoming out 4.5 years ago in late 2011 (unadjusted for dividends).

If we let recent history serve as a probabilistic guide for what to expect from MHG and Norwegian salmon farming going forward we could just go back 10 years and compare the Norwegian salmon export price, in USD, with MHG's USD share price."

There is actually much more technical analysis on the coming crunch of Marine Harvest, but the point is that its share price is over valued, and has come to be closely tied to salmon prices - take a look at the graph comparing the two. The recent tear has come from Chile's disaster with algal blooms, killing 25 million farmed salmon, and ironically boosting prices, including MH that operates in Chile.

You will recall scientists saying an El Nino, fish farm sewage and dumping more than 75,000 metric tonnes of dead salmon at sea are the likely causes of the bloom and resultant kill off. 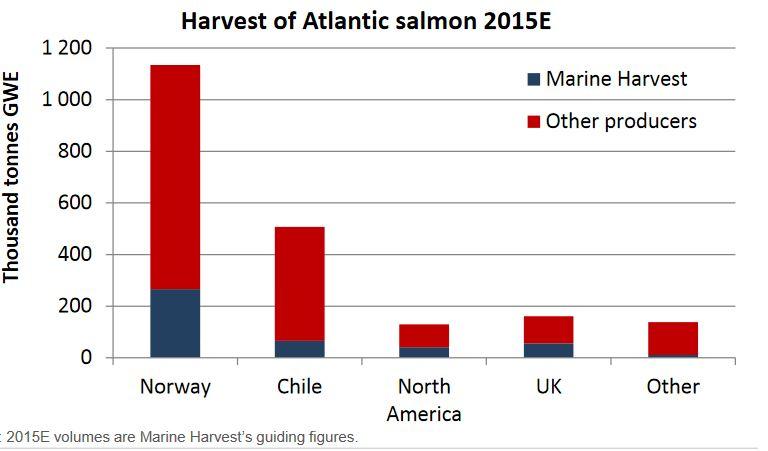 Because of its size, Marine Harvest dominates world Atlantic salmon harvests. But going forward, the long term growth of 6% per year, is going to slow to 3% until 2020, as in a very long time.

And there is this nagging problem of high dividends versus low cash flow and profit:

"MHG has chosen to keep its shareholders short-term happy by paying out too high dividends in relation to its operating profitability and cash flow."

And here is some of what Fredriksen owns:

This is important because Marine Harvest and the rest of the companies trot out the spin that they are here for local jobs in areas on hard times and revenue for countries. Not so, corporations exist only for shareholders. And Fredriksen is on a higher level, but a trader, so he will sell what will make him money, regardless of the problems for shareholders.

In other words Fredriksen believes his own company is over priced and cashed out half a billion dollars of roughly 1.5B USD of his Marine Harvest holdings.

And others at Marine Harvest did the same (also in my News Bites post): "MHG chairman Ole-Eirik Lerøy cut his holdings by 1.1 million shares, or more than a third, to 2.1 million shares and MHG CEO Alf-Helge Aaarskog sold off 100,000 shares, corresponding to most of his shareholdings. Aaarskog now holds 38,570 shares and close to 1.7 million options in MHG."

So, what do the authors of this analysis (it is as dense, tricky and cynical as you remember Michael Douglas in Anaconda, er, Wall Street) see in Marine Harvest's future? In their own words:

So, this just keeps on supporting the obvious: that fish farms are a Boom Bust Industry, and with Marine Harvest about to Bust, it's time to sell their shares, just like its owner, Fredriksen.

And Norway itself is doing poorly because it is an oil exporting nation. The central bank has devalued the kroner 30%. This stimulates exports, including salmon, because the price is cheaper to purchasers. Norway unemployment is high, including 30,000 jobs lost in oil.

But the NOK devaluation can't last and when the price rises, all the farmed salmon sector companies will crash, not to mention oil. Shades of Alberta and Canada.


The technical analysis points out that 2016 - 2017 are bad for Marine Harvest shares. And long term salmon growth will halve to 3%, so its dividends (what shareholders really want) are unsustainable.

The fish farm disease hearings were initiated by Justice Cohen as a standalone session in his Commission into missing Fraser sockeye. He had concluded hearings but initiated a whole third section because he received evidence that made him conclude disease needed to be examined.

While many scientists had recorded ISA and other diseases, it was the Kibenge report that showed so wide spread ISA that he had to reopen the hearings. DFO submerged Cohen with several hundred thousand documents, but failed to include the Kibenge report with its damning evidence, belatedly, on the grounds all findings were false positives.

Cohen and the BC public didn't buy it. When his 1200 page tome came out the third section was largely about fish farm diseases and some 20 of the 75 recommendations were, too. The most important was that the government of Canada cancel the conflict of interest with fish farms that DFO has, and to just get on with saving wild Pacific salmon. He also said to move fish farms out of the water of salmon migration routes, particularly near Quadra Island.

“I therefore conclude that the potential harm posed to Fraser River sockeye from salmon farms is serious or irreversible. Disease transfer occurs between wild and farmed fish, and I am satisfied that salmon farms along the sockeye migration route have the potential to introduce exotic diseases and to exacerbate endemic diseases that could have a negative impact on Fraser River sockeye.”

You will recall that DFO just recently, after the new Liberal government received 16,000 letters from BC voters calling for the appeal by Marine Harvest and DFO, to overturn the 2015 decicision banning fish farms from putting diseased fish in its fish farms, asked for an adjournment to study new evidence. See: http://www.leadnow.ca/wild-salmon/.

That evidence was that Dr. Kristi Miller has discovered PRV the presumed causative virus of HSMI, in a fish farm in Johnstone Strait.

First Nations, fearing for their wild salmon resource, the major environmental factor in the proliferation of FNs in BC - one third of all FNs in all of Canada, may just declare it wants control over salmon. Here are the issues:

DC Reid
I won the national RODERICK HAIG- BROWN AWARD, 2016, for environmental writing, largely for this blog (www.fishfarmnews.blogspot.com) that has become a global portal for the environmental damage made by Norwegian-style fish farms. I won the Art Downs Award for 2012 for sustained and outstanding writing on environmental issues, in my case, fish farms. The award was based on 10 columns on fish farm issues in the Times Colonist newspaper, three public submissions to the Cohen Commission on Fraser sockeye and this blog. If you want to book me to speak, for a lecture, talk, or panel on fish farm environmental damage, contact me on this blog by leaving a message on a post.